forbes admits it was ‘wrong on monsanto, really wrong’

from gmwatch: The only dubious aspect of this article is the suggestion that Monsanto's fortunes might be saved by its new soybean seed with "high levels of omega-3 fatty acids," which "could appeal to health-conscious consumers." We doubt that Monsanto soybeans (if GM) and health-conscious consumers will ever be seen near the same dinner plate. That's especially so as there are good sources of omega-3 fatty acids that don't involve the risks of GM soy. 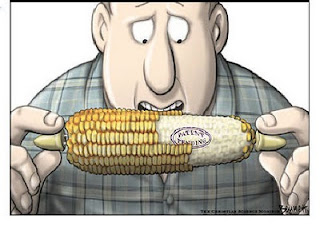 from forbes: Forbes made Monsanto the company of the year last year in The Planet Versus Monsanto. I know because I wrote the article. Since then everything that could have gone wrong for the genetically engineered seed company… has gone wrong. Super-weeds that are resistant to its RoundUp weed killer are emerging, even as weed killer sales are being hit by cheap Chinese generics. An expensive new bio-engineered corn seed with eight new genes does not look impressive in its first harvest. And the Justice Department is investigating over antitrust issues. All this has led to massive share declines. Other publications are making fun of our cover story.

flashback: monsanto named company of the year by forbes