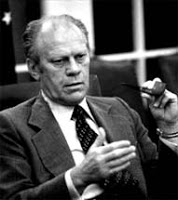 from raw story: Did the CIA orchestrate a cover-up in the assassination of President John F. Kennedy?

According to the publisher of a new book, who appeared on Fox News Wednesday morning, the last living words of former President Gerald Ford fingered the CIA in the orchestration a cover-up of Kennedy's assassination.

"This book, actually authored by Gerald Ford, finally proves once and for all that the CIA, our government, did destroy documents and cover-up many facts that day in Dallas," publisher Tim Miller told Fox & Friends Wednesday morning.

Kennedy was killed as his motorcade rolled through downtown Dallas Nov. 22, 1963. Officially seen as the work of a single shooter, Lee Harvey Oswald, the Kennedy assassination has sparked myriad conspiracy theories placing responsibility for the assassination on a variety of suspects, including the CIA, the Mafia or Cuban President Fidel Castro.

Although Miller was given little time to go into detail about the book on Wednesday morning's show, a press release gives more detail on the book, being published by Flat Signed publishers.

In the book, Ford argues that the CIA destroyed information about the assassination, but he "contends with interesting specificity that Oswald was the only shooter," Miller says.

"There was a conspiracy to kill John F. Kennedy," says Tim Miller, CEO of FlatSigned.com, in the release. "There is no doubt that President Gerald Ford knew more about the JFK death. There is no doubt President Clinton knows more. Has he or any other US President since November 22, 1963 ever swore under oath that they know no more?"

This video is from Fox's Fox & Friend's, broadcast on November 21.