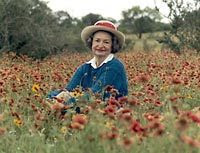 from houston chronicle: Lady Bird Johnson, a former first lady, a Texas legend, a woman who used the humble wildflower to teach an entire nation to treasure and preserve the environment, died Wednesday. She was 94.

In recent years, the widow of Lyndon Baines Johnson was virtually silenced by a stroke. She was nearly blinded by macular degeneration. Still, she lived her life with enthusiasm, dividing her time between the family ranch in Stonewall and an Austin home near the presidential library dedicated to her husband. She thrived on visits with friends and family and inhaled mystery books on tape.

Family spokesman Neal Spelce said Johnson's final days were good ones, surrounded by loved ones who had been holding a vigil for the past few days.

Johnson's daughters, Luci Baines Johnson and Lynda Johnson Robb, were by her side when she died, as they had been almost continually during her final months.

The official cause of death was respiratory failure, Spelce said, adding, "Actually, natural causes, when you get right down to it. ... She was simply 94 years old."

flashback: lady bird marked jfk's death with audio diary entry
from npr: John F. Kennedy's assassination... It's an event typically remembered by the iconic video recording. But there's another perspective of the killing that's equally powerful: an entry from an audio diary of Lady Bird Johnson. The recording is included in the exhibit Eyewitness, at the National Archives.