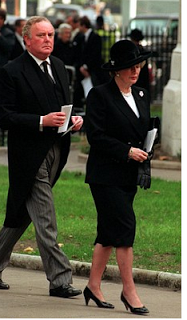 A former Tory Minister steps up to out pedophiles among British politicians, reports Mail Online. "Rod Richards, a former Conservative MP and ex-leader of the Welsh Tories, made the shocking allegation that he had seen evidence linking Sir Peter Morrison to the North Wales children’s homes case, in which up to 650 children in 40 homes were sexually, physically and emotionally abused over 20 years...Mr Richards – who helped establish the inquiry that unearthed the scale of the abuse – said bluntly: ‘What I do know is that Morrison was a paedophile. And the reason I know that is because of the North Wales child abuse scandal.’...Mr Richards could not offer anything to substantiate his claims against Morrison, who died in 1995 at the age of 51. But he said that as the MP for Chester, he would have no obvious reason to visit care homes in other MPs’ constituencies." Richards also observes head of North Wales Child Abuse inquiry, should've seen evidence against Morrison in preliminary documents, "‘it would seem that there are some parallels with Savile in that Morrison got in under the radar, and his activities did not appear in the final report’." The Mail Online article also cites Richards as implicating another MP, "Mr Richards also linked a...Tory grandee – now dead – to the scandals at homes including Bryn Estyn and Bryn Alyn Hall, both near Wrexham." The present writer sees this as a necessary step to stemming huge problem of pedophilia. Hats off to Rod Richards!  A question remains, however, what will elite do in response if deprived of their degenerate outlets?