Forthcoming ‘Preacher’ Film: Will It Be a Godsend or Blasphemy? 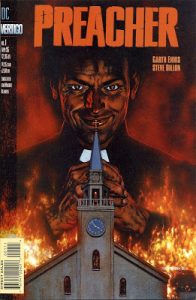 from reuters: Director D.J. Caruso, whose new movie “I Am Number Four” claimed the No. 3 spot at the holiday weekend box office, has closed a deal to shoot the comic-book adaptation “Preacher.” The popular 1990s DC/Vertigo series told the story of a down-and-out Texas preacher possessed by Genesis, a supernatural entity conceived by the unnatural coupling of an angel and a demon. Given immense powers, the preacher teamed with an old girlfriend and a hard-drinking Irish vampire and set out on a journey across America to find God – who apparently had abandoned his duties in heaven – and hold him accountable for his negligence. Created by Garth Ennis and Steve Dillon, “Preacher” ran from 1995 to 2000. Sam Mendes was previously attached to direct the Columbia adaptation, but he left for the new James Bond film. Darren Aronofsky then flirted with the project at one point. Caruso’s other credits include “Eagle Eye” and “Disturbia.”