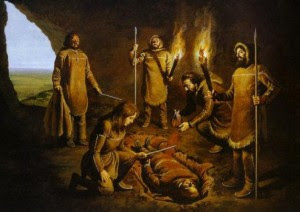 From Blood Red to Brilliant White: Colour Symbolism in the Palaeolithic

Good article by Mike Williams on the significance of the color spectrum and organic material in burial ceremonies.

from PrehistoricShamanism.com: "...This is a small but representative selection of Palaeolithic burials since others seem to share characteristics that make them special. It is plausible that all interred individuals were considered spiritually powerful whilst alive, possibly even the shamans of their communities. But while people may have accepted these individuals had power during life, after death, the situation was more ambiguous. Some lay secure with their ritual paraphernalia, and the two children at Sunghir dazzled in their layer of ivory beads, but for most it was a final layer of ochre that released such latent power. Perhaps this helped in crossing to the afterlife, or perhaps people thought that it actually kept the dead spirit close, in order to watch over the community. It is striking that many Palaeolithic burials were weighted down or were bound, possibly in an attempt to keep the spirit close. It was not the colour red that made ochre significant during the Palaeolithic but its ability to bring out spiritual power through brilliance. Even kept sealed within the confines of a bone holder as at Sunghir, ochre was a vital component of burial. If these burials were shamans and their spirits had tasks to complete after death, it was a deep red covering of ochre that brought forth their power. Red may be a significant colour to us today, and we might readily associate it with blood and the spark that provides life, but to Palaeolithic people the colour may have been only a means to an end. Blood red brought forth brilliant white and released the latent power it contained..."