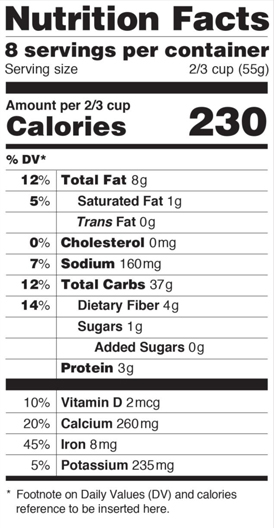 from politico.com: The architect of the biggest change to nutrition labels in two decades is the founder of a pop culture and arts magazine that lists Daft Punk and David Bowie as contributors. He also once played a major role in a successful national advertising campaign that used disturbing images, like body bags and a cowboy, who’s had a tracheotomy, singing through his throat to get kids to stop smoking. Kevin Grady, a 49-year-old Boston-based graphic designer, might not be who you were expecting to be tapped by the Food and Drug Administration to overhaul the Nutrition Facts panel, a label that appears on roughly 700,000 food and beverage products nationwide, as part of the Obama administration’s effort to nudge Americans into healthier eating. He’s not a bureaucrat, nutritionist or even a labeling expert. Perhaps that’s why Grady, a design director at IDEO and the editor-in-chief/creative director at LEMON magazine, was not afraid to take a slightly unconventional approach and venture outside design norms, in part by blowing up the font size for calorie counts on nutrition labels from 8- to an eye-popping 24-point font, making the number even larger than the “Nutrition Facts” text.