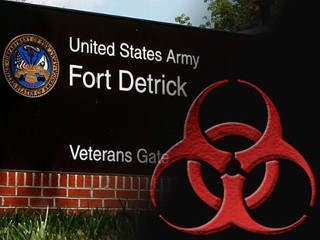 from washington post: An inventory of potentially deadly pathogens at Fort Detrick’s infectious disease laboratory found more than 9,000 vials that had not been accounted for, Army officials said yesterday, raising concerns that officials wouldn’t know whether dangerous toxins were missing.

After four months of searching about 335 freezers and refrigerators at the U.S. Army Medical Research Institute of Infectious Diseases in Frederick, investigators found 9,220 samples that hadn’t been included in a database of about 66,000 items listed as of February, said Col. Mark Kortepeter, the institute’s deputy commander.

The vials contained some dangerous pathogens, among them the Ebola virus, anthrax bacteria and botulinum toxin, and less lethal agents such as Venezuelan equine encephalitis virus and the bacterium that causes tularemia. Most of them, forgotten inside freezer drawers, hadn’t been used in years or even decades. Officials said some serum samples from hemorrhagic fever patients dated to the Korean War.

Kortepeter likened the inventory to cleaning out the attic and said he knew of no plans for an investigation into how the vials had been left out of the database. “The vast majority of these samples were working stock that were accumulated over decades,” he said, left there by scientists who had retired or left the institute.

“I can’t say that nothing did [leave the lab], but I can say that we think it’s extremely unlikely,” Kortepeter said.

Still, the overstock and the previous inaccuracy of the database raised the possibility that someone could have taken a sample outside the lab with no way for officials to know something was missing.