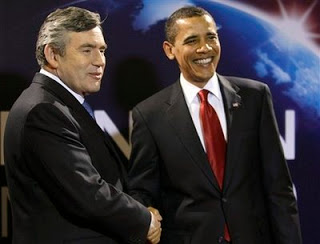 from ap: World leaders pledged $1.1 trillion in loans and guarantees to struggling countries and agreed Thursday to crack down on tax havens and hedge funds - but failed to reach sweeping accord on more stimulus spending to attack the global economic decline. At the end of a highly anticipated one-day gathering, leaders of the Group of 20 nations said they would upgrade an existing financial forum to serve as an early warning monitor to flag problems in the global financial system. They did not, however, satisfy U.S. and British calls for new stimulus measures. Nor did European politicians get their goal of a global financial superregulator. 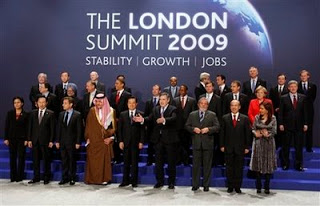 from global research: The G20 summit meeting in London from April 1st onward was loudly announced and publicized. Those 20 industrialized and emergent countries (G20) are meeting to find solutions to the crisis. But long before the end of the summit, it is clear that they will not rise to the challenge. The G20 was not created in order to provide genuine solutions; it was hastily summoned a first time in November 2008 to salvage the powers that be and try and to plug the breaches in capitalism. It is therefore impossible for this body to opt for measures that are sufficiently radical to save the day. 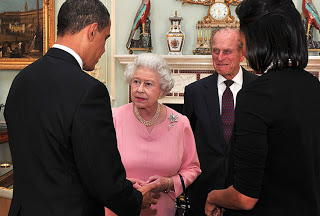 from steve watson: The sight of any U.S. president literally bowing to British royalty is enough for many Americans to become outraged. However, the fact that the latest to do so is America’s first black president made yesterday’s exchange between Obama and the Queen of England even more troublesome. Prior to meeting the Queen and her notoriously racist husband, Prince Philip, Obama announced that he “loves” her and that “in the imagination of people throughout America” the queen stands for “decency” and “civility”. How repugnantly ironic that the first black president of the so called “free world” should refer to the most entrenched prejudiced and elitist institution in Europe as an icon of “civility”! ... Reports also circulated regarding Obama practicing bowing and brushing up on courtly etiquette ahead of the meeting... Michelle Obama curtsied to the Queen, however, later on she was treasonously caught inappropriately putting her hands on the glorious Monarch. The London Telegraph even issued a report on how the move was “a departure from what is considered appropriate protocol when meeting the Queen.” ... Prince Philip has made so many racist remarks in public, that they literally fill an entire book... It is well documented that Prince Philip’s sister, Sophia, was married to Christopher of Hesse-Cassel, an SS colonel who named his eldest son Karl Adolf in Hitler’s honour. Indeed, all four of Philip’s sisters married high-ranking Nazis... Two years ago, more revelations of Philip’s Nazi links emerged in a book that featured never before published photographs of Philip aged 16 at the 1937 funeral of his elder sister Cecile, flanked by relatives in SS and Brownshirt uniforms... Philip also helped start the World Wildlife Fund with former Nazi SS Officer Prince Bernhard of the Netherlands, who is closely affiliated with the founders of the Bilderberg international power group... Philip was also trained in the Hilter Youth. His belief in Nazi ideology is clear when one looks at what he has said on the subject of overpopulation. In the foreword to his 1986 book If I Were an Animal, Prince Philip wrote, “In the event that I am reincarnated, I would like to return as a deadly virus, in order to contribute something to solve overpopulation.”

riot police storm g20 protesters' squats... as the violence moves to france & police teargas hundreds of anti-nato protesters
from ap: Police clashed with hundreds of protestors on the eve of a NATO summit in Strasbourg Thursday, firing tear gas at the crowd to stop them entering the city centre, an AFP correspondent said. Masked protestors smashed a dozen bus shelters, set fire to trash bins and built a street barricade in a south suburb of Strasbourg, after marching from a "peace camp" set up by activists on the outskirts of the French city. Police said 600 people took part, but organisers put the figure at 2,000.