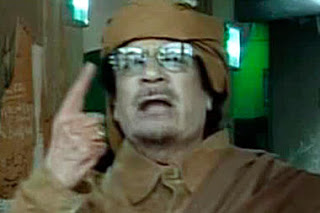 from raw replay: As his government increasingly fell out beneath him, 41-year Libyan dictator Muammar al-Gaddafi struggled to keep projecting an image of power. After a day of rumors about whether he was still in the country, he was said to be planning a major speech Monday, but then appeared on state television for approximately 15 seconds, merely to claim that he was in Tripoli. This video is from Al Jazeera English, broadcast Feb. 22, 2011.

related warwhores updates:
great american war machine rolls on under obama*
US companies sold $247b in weapons last year*
military to investigate claim psy-ops was used to influence US senators*