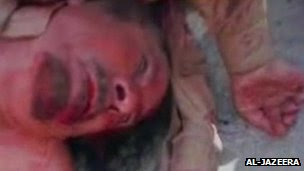 africa open for plunder now that libya has fallen

from bbc: Libya's ex-leader Col Muammar Gaddafi has been killed after an assault on his birthplace of Sirte, officials say. The circumstances of his death are not yet clear. Video has emerged purporting to show Col Gaddafi being captured alive and bundled on to a truck. Fighters loyal to the National Transitional Council (NTC) said they found him hiding in a hole, and shot him when he tried to escape. Col Gaddafi was toppled in August after 42 years in power. The NTC now plans to officially announce Libya's "liberation" before indicating the next steps towards democratic elections. After a day of conflicting reports and rumours, the NTC's acting prime minister Mahmoud Jibril told a news conference: "We have been waiting for this moment for a long time. Muammar Gaddafi has been killed."

World leaders welcomed the news, urging the NTC to carry through its promise to reform the country.

UK Prime Minister David Cameron, who had taken a leading role in Nato's intervention, said it was "a day to remember all of Col Gaddafi's victims".

UN Secretary General Ban Ki-moon called it a "historic" moment, but warned: "The road ahead for Libya and its people will be difficult and full of challenges."

Proof of Col Gaddafi's fate came in grainy pieces of video, first circulated among NTC fighters and then broadcast by international news channels.

The first videos showed a bloodied corpse, with some channels picking up footage they said showed the colonel's body being dragged through the streets.

An NTC fighter told the BBC he found Col Gaddafi hiding in a hole in Sirte, and the former leader begged him not to shoot.

The fighter showed reporters a golden pistol he said he had taken from Col Gaddafi.

Later, another video emerged of the colonel being bundled on to the back of a pick-up truck after being captured alive.

NTC fighters said he was shot when he tried to escape.

None of the video footage has been independently verified.