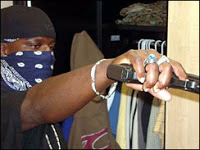 gangs spreading in the military

(well, i guess you'll have that when you actively recruit them...)

from cbs: Evidence of gang culture and gang activity in the military is increasing so much an FBI report calls it "a threat to law enforcement and national security." The signs are chilling: Marines in gang attire on Parris Island; paratroopers flashing gang hand signs at a nightclub near Ft. Bragg; infantrymen showing-off gang tattoos at Ft. Hood.

"It's obvious that many of these people do not give up their gang affiliations," said Hunter Glass, a retired police detective in Fayetteville, North Carolina, the home of Ft. Bragg and the 82nd Airborne. He monitors gang activity at the base and across the military.

"If we weren't in the middle of fighting a war, yes, I think the military would have a lot more control over this issue," Glass said. "But with a war going on, I think it's very difficult to do." ...

The U.S. Army Criminal Investigation Command reported 61 gang investigations and incidents last year, compared to just 9 in 2004. But army officials point out less than 1 percent of all its criminal investigations are gang related...

The rise in gang activity coincides with the increase in recruits with records. Since 2003, 125,000 recruits with criminal histories have been granted what are known as "moral waivers" for felonies including robbery and assault.