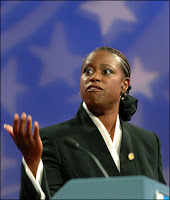 The lawsuit was filed on July 26, 2007, in State Court of Fulton County, according to a copy of the court filing obtained by Atlanta Progressive News.

The lawsuit focuses on what McKinney argues to be false claims in a July 30, 2006, Editorial written by the AJC’s Editorial Page Editor, Cynthia Tucker. Tucker received a Pulitzer Prize for a series of columns that year including that one...

Tucker wrote, McKinney "suggested President Bush had known in advance about the Sept. 11 attacks but did nothing to stop them so his friends could profit from the ensuing war." Tucker did write this.

The audio recording and transcript of McKinney’s actual remarks on Bush and September 11, 2001, were presented in the movie, American Blackout, and the record shows that McKinney never said what Tucker claims she did, despite the insistence of the AJC and other media outlets.