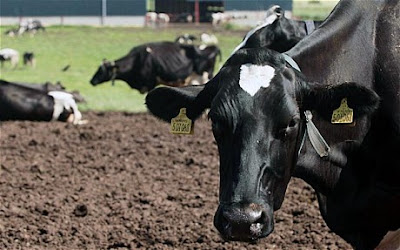 from telegraph: The scientists have successfully introduced human genes into 300 dairy cows to produce milk with the same properties as human breast milk. Human milk contains high quantities of key nutrients that can help to boost the immune system of babies and reduce the risk of infections.

The scientists behind the research believe milk from herds of genetically modified cows could provide an alternative to human breast milk and formula milk for babies, which is often criticised as being an inferior substitute. They hope genetically modified dairy products from herds of similar cows could be sold in supermarkets. The research has the backing of a major biotechnology company.

The work is likely to inflame opposition to GM foods. Critics of the technology and animal welfare groups reacted angrily to the research, questioning the safety of milk from genetically modified animals and its effect on the cattle's health.