states of emergency: europe freezes as russia cutsoff gas
from voanews: With freezing temperatures across most of Europe, there was heated anger, especially in Eastern Europe on Wednesday, about the suspension in natural gas deliveries from Russia through Ukraine. The gas crisis comes at a difficult time for leading politicians, especially in Bulgaria, where some 2,000 people demanded the government's resignation on Wednesday over allegations of corruption. The shortages of natural gas from Russia added to anger of protesters who braved the cold in Bulgaria's capital, Sofia, to demand the resignation of the country's Socialist-led government.

tanker-grabbing pirates drown, with bounty
from danger room: The 1,000-foot-long Saudi oil tanker Sirius Star has been released after a ransom was paid, two months after Somali pirates launched a shocking raid to capture the $150-million vessel and its $100-million cargo of crude oil. But in a bizarre twist, five of the newly wealthy hijackers drowned while celebrating their windfall... Later, as the pirates were motoring back to shore in boats, "singing in colorful tone, and exchanging some ridiculous words," one boat capsized and five pirates - who could not swim - drowned.

lethal tech making way from US to iran via front companies

video: cheney: it doesn’t matter that we haven’t captured bin laden
from thinkprogress: After the 9/11 attacks, President Bush famously declared that he would capture Osama bin Laden “dead or alive.” However, less than a year later — in March 2002 — Bush said that he was “not that concerned” about the al Qaeda leader. Today on CNN’s Late Edition, host Wolf Blitzer asked Vice President Cheney, “How frustrating is this to you personally, knowing he’s [bin Laden] still at large?” Cheney hesitated, then simply replied that he would “obviously…like to solve that problem.” He added that it’s more “important” to “keep…this country safe,” indicating that bin Laden is inconsequential.

from cryptogon: This little curiosity comes to us from the Telegraph’s Culture Picture Galleries section. As of now, there’s an entry called: Operation Blackjack: The Story of Terrorist Nuclear Attacks on Major Western Cities. On the page, we read: Blackjack - A slide show story. The events portrayed in this slide show are entirely fictitious. There is no author listed.

mexican collapse & the plan for a north american union 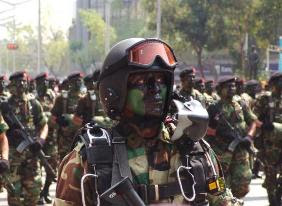 from kurt nimmo: Mike Sunnucks, writing for the Phoenix Business Journal, exposes details of a recent report released by the Pentagon. According to the report, globalization and urbanization will fuel “social unrest, as well as a potential collapse of the Mexican government as that country deals with violence and corruption induced by drug cartels and organized crime.” On the surface, the Joint Operating Environment 2008 report [2.8mb PDF] by the U.S. Joint Forces Command is a self-serving document. It predicts multiple crises “if there are major reductions in U.S. defense spending,” including “terrorist networks obtaining nuclear and biological weapons, as well as instability and aggressiveness involving China, India, Pakistan, India and the Middle East.” On the other hand, the report may be seen as a blueprint for the establishment of a North American Union.