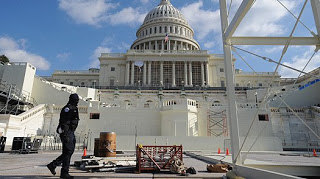 obamessiah: inaugural emergencies & the end of the beginning

'state of emergency' declared for inauguration

from nytimes: It is true, President Bush sounded alarms about Barack Obama during the campaign season. On Tuesday, Mr. Bush went one step further: He declared Mr. Obama’s inauguration an actual emergency. The declaration, though, was not a political statement about Republicans being run out of town. Rather, it was a bureaucratic move intended to provide additional federal money to help Washington cope with the huge crowds that are expected to turn out for the ceremony next Tuesday that will make Mr. Obama the nation’s first black president. The government has set aside $15 million to help pay for security and medical personnel. But Mayor Adrian M. Fenty asked for more money, citing possible crowds of 1.5 million to 2 million and “the associated stresses that it would place on the city’s capabilities, particularly the medical community,” said Scott Stanzel, a spokesman for Mr. Bush. Mr. Bush granted the request as “a precaution,” Mr. Stanzel said; if Washington needs the money, it can apply for reimbursement through the Federal Emergency Management Agency. The declaration will also allow federal public health workers to join in the public safety effort. The president’s power to declare a state of emergency is typically used after natural disasters, although Mr. Stanzel said presidents had occasionally declared emergencies before an anticipated event. But never before, he said, has an advance declaration been used for a “non-disaster.”

nasa to show off new lunar module at inauguration 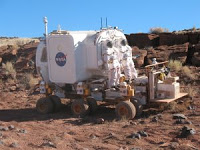 from rogue government: NASA is sending a prototype of its new lunar rover to appear in the Presidential Inauguration Parade in Washington, D.C. The six-wheeled Small Pressurized Rover, or SPR, will provide the big, geeky finish to the line of floats and marching bands scheduled to head down Pennsylvania Avenue on Jan. 20. The hope is that the new Obama Administration will support NASA's current plan to return to the moon, on or around 2020. The battery powered, lunar SUV will be piloted by astronaut and SPR project manager Mike Gernhardt. When it reaches President Barack Obama's box at the end of the parade route, spacesuited astronaut Rex Walheim will detach from the vehicle, carrying the American flag. He will take several step towards toward the reviewing stand, stop, and salute the new President, ending the parade.

'arrest bush 2009' plans inauguration day protest
from raw story: A group calling itself "Arrest Bush 2009" has announced its intention to hold a "Yes We Can Arrest Bush" event in front of the FBI Building in Washington, DC during the Inaugural Parade. However, coordinator Jose Rodriguez insists, "It's not a protest; it's a celebratory event." Arrest Bush 2009, which is sponsored by the Washington Peace Center, After Downing Street, and Shoes For Bush, is demanding that Bush be arrested for war crimes and for lying to the American people.

feds cite racist chatter for 'higher state of alert' in inauguration
from nydailynews: Federal agents are on “a higher state of alert” because of hate talk by white supremacists about Barack Obama’s inauguration, officials told the Daily News on Tuesday. “That chatter is out there, no doubt about it,” one senior FBI agent in Washington said this afternoon, adding that no credible plots against the 56th Presidential Inauguration have been detected. The Bureau has ordered agents in all 56 field offices to “shake the trees” in advance of the Jan. 20 swearing-in of the 44th President, who will become the first African-American to occupy the Oval Office. “They’re talking to sources to determine if there is any threat information in regard to the Inauguration,” the FBI source said. “Everybody in law enforcement dealing with that particular (white supremacist) ‘clientele’ is on a higher state of alert,” a senior agent at the Bureau of Alcohol, Tobacco, Firearms and Explosives told The News. The ATF has expertise infiltrating white supremacist groups. A classified threat assessment for the Inauguration by the FBI and Homeland Security Department citing agitated hate groups was sent to police agencies this week. Counterterrorism officials have also picked up chatter from Islamic militants, but the agitated domestic hate groups are “the big concern,” said another FBI official. But Secret Service Director Mark Sullivan told reporters at a briefing with local officials: “We have no credible intelligence to suggest a credible threat (to Obama’s Inauguration).” During Obama’s campaign, white racists in Colorado and Tennessee were charged in separate plots against the candidate. Local officials from D.C., Maryland and Virginia cited security concerns Tuesday for new restrictions on those attending the ceremonies - a throng estimated between 1.5 and 3 million. The historic ceremonies will be the largest National Special Security Event ever. At least 20,000 cops, federal agents and National Guard troops will be deployed.

obama's high-tech inauguration day
from techradar: Washington DC will be the focus of the world's media next Tuesday for Barack Obama's Inauguration as the 44th President of the USA - and that means it will also be home to some cutting edge technology. The Department of the Interior is responsible for all streets but one entering the downtown Mall area where the parade and ceremony will occur. It plans to oversee the event using a wall-sized display of flat-screen LCD monitors called the OptiPortal, made by the Electronic Visualization Laboratory (EVL) at the University of Chicago. The OptiPortal takes ultra-high-resolution images backed by supercomputer power to provide expansive, razor-sharp, eagle's eye aerial pictures of the inauguration site.

geithner faces tough questions on taxes & housekeeper
from dpa: President-elect Barack Obama's pick for treasury secretary could face tough questions in his confirmation hearing after problems arose Tuesday with his taxes and the immigration status of his former housekeeper.

obama's intel adviser involved in security breach
from newsmax: Obama’s top terrorism and intelligence adviser, John O. Brennan, heads a firm that was cited in March for breaching sensitive files in the State Department’s passport office, according to a State Department Inspector General’s report released this past July. 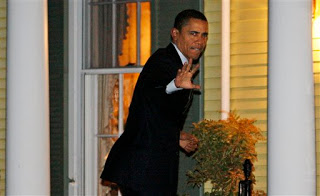 from mcclatchy: This could ruin their reputation: President-elect Barack Obama Tuesday evening attending a dinner party at the home of conservative columnist George Will, attended by fellow conservatives William Kristol and David Brooks. The press pool following the president-elect reported that he left his temporary home at Washington’s Hay-Adams hotel Tuesday evening and arrived a short time later at Will’s home in the Maryland suburbs. A press pool photographer shot a photo of Kristol, an editor of the Weekly Standard, and Brooks, a columnist at the New York Times. No other scribes noted. 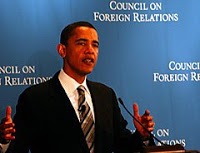 senate approves $350bn in bail-out funds requested by obama
from guardian: A divided US Senate has approved president-elect Barack Obama's request for $350bn in unspent financial bail-out funds. The 52-42 vote releases the money in the midst of rising foreclosures and a worsening climate for US banks. It marked Obama's first legislative victory, days before he assumes office. The vote today came amid strong opposition from critics of how the first $350bn has been spent. Obama has said he wants to use the money to unclog the credit markets and extend loans to consumers, small businesses and municipalities. Obama's transition team said he also would use $50bn to $100bn of the money to reduce the number of house foreclosures.

starbucks: 'are you in' obama’s civilian national security force?
from infowars: Starbucks wants to make it easy to join Obama’s proposed paramilitary brown shirt volunteers. “Starbucks will honor each person who pledges with a free tall brewed coffee beginning Wednesday, Jan. 21 through Sunday, Jan. 25. The goal of the effort is to raise pledges in excess of one million hours of service from all over the country,” a Starbucks press releases states. Starbucks wants to “make it easy to participate in the President-elect’s call for national service.” Back in September, the Christian Science Monitor reported that Obama plans to “leverage volunteerism in communities across the country” and make government “cool again.” Fortunately, a lot of people are beginning to realize government is never cool, as the founders warned a couple hundred years ago. In the months ahead, these folks will likely clash with Obamatron zombies, maybe even in the street.