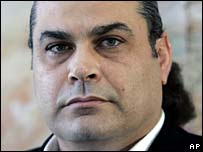 from bbc: Germany has ordered the arrest of 13 suspected CIA agents over the alleged kidnapping of one of its citizens.

Munich prosecutors confirmed that the warrants were linked to the case of Khaled al-Masri, a German national of Lebanese descent.

Mr Masri says he was seized in Macedonia, flown to a secret prison in Afghanistan and mistreated there.

He says he was released in Albania five months later when the Americans realised they had the wrong man.

Mr Masri says his case is an example of the US policy of "extraordinary rendition" - a practice whereby the US government flies foreign terror suspects to third countries without judicial process for interrogation or detention.