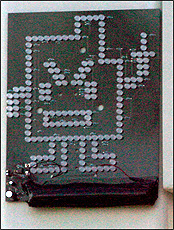 from boston herald: A guerilla marketing campaign for a popular adult cartoon thrust Boston into pandemonium today as at least 10 bombs scares turned out to be battery-operated ads strategically place around the city, the Herald has learned.

Federal, state and local police swarmed around the city as reports poured in of suspicious devices, closing roads, tunnels and bridges for hours.

The chaos touched off a traffic nightmare and prompted a tense press conference from Gov. Deval Patrick and Mayor Thomas M. Menino, who assured residents the matter was under control. Fears of a possible terrorist act were quelled when it was determined the devices were part of an underground advertising campaign for the Cartoon Network TV show "Aqua Teen Hunger Force." ...

"The packages in question are magnetic lights that pose no danger. They are part of an outdoor marketing campaign in 10 cities in support of Adult Swim’s animated television show Aqua Teen Hunger Force. They have been in place for two to three weeks in Boston, New York, Los Angeles, Chicago, Atlanta, Seattle, Portland, Austin, San Francisco, and Philadelphia. Parent company Turner Broadcasting is in contact with local and federal law enforcement on the exact locations of the billboards. We regret that they were mistakenly thought to pose any danger," said a statement by Turner Broadcasting, which also owns CNN.