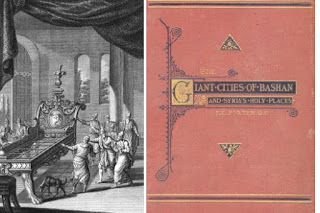 Giant Cities of Bashan And Return of the Nephilim

The Bible braces reader for End Times and return of the Nephilim, reminding us as in the days of Noah shall it be also in the days of the coming of the Son of Man.  Author Steve Quayle reported a few years ago on an encounter between US military and a Nephilim in a remote valley in Afghanistan.  The Nephilim remain a curiosity, individuals growing to heights of 30-40 feet.   It still fascinates to imagine what six fingered, six toed giants were like in appearance, although we may not want meet one as their character was known to be thoroughly foul?  Quayle goes into detail about the Nephilim in a Coast to Coast interview.  King Og of Bashan was last of the Rephaim (Hebrew for "giants" AKA Nephilim), who fell at the battle of Edrei, his bed measured 9 cubits (13.5 ft long) (picture, left).   Bashan is bordered on one side by Mt. Hermon, where the Nephilim (aka "the fallen ones") descended to Earth.  Reverend J L Porter shared this curiosity about Bashan nearly 150 years ago and traveled south from Damascus to tour a few of the sixty cities and towns that were still standing.  Porter writes in his book, "The Giant Cities Of Bashan And Syria's Holy Places," documenting his travels through ancient land, "Bashan is the land of sacred romance. From the remotest historic period down to our day there has ever been something of mystery and of strange wild interest connected with that old kingdom."


Porter provides a firsthand description of just one of the mostly intact 4,000 year old Cyclopean structures made from black basalt rocks:

"The house seemed to have undergone little change from the time its old master had left it; and yet the thick nitrous crust on the floor showed that it had been deserted for long ages. The walls were perfect, nearly five feet thick, built of large blocks of hewn stones, without lime or cement of any kind. The roof was formed of large slabs of the same black basalt, lying as regularly, and jointed as closely, as if the workmen had only just completed them. They measured twelve feet in length, eighteen inches in breadth, and six inches in thickness. The ends rested on a plain stone cornice, projecting about a foot from each side wall."

"The chamber was twenty feet long, twelve wide, and ten high. The outer door was a slab of stone, four and a half feet high, four wide, and eight inches thick. It hung upon pivots, formed of projecting parts of the slab, working in sockets in the lintel and threshold; and though so massive, I was able to open and shut it with ease. At one end of the room was a small window with a stone shutter. An inner door, also of stone, but of finer workmanship, and not quite so heavy as the other, admitted to a chamber of the same size and appearance. From it a much larger door communicated with a third chamber, to which there was a descent by a flight of stone steps. This was a spacious hall, equal in width to the two rooms, and about twenty-five feet long by twenty high. A semicircular arch was thrown across it, supporting the stone roof; and a gate so large that camels could pass in and out, opened on the street. The gate was of stone, and in its place; but some rubbish had accumulated on the threshold, and it appeared to have been open for ages. Here our horses were comfortably installed. Such were the internal arrangements of this strange old mansion. It had only one story; and its simple, massive style of architecture gave evidence of a very remote antiquity!"

The author provides an amazing description of still intact black structures that were homes to Giants. You may assume Nephilim were inferior as they fell to the humans who battled them?  The Circle of Og AKA Circle of Rephaim, a Stonehenge-like structure, may convince otherwise, these were a people who possessed a sophisticated knowledge of skies.