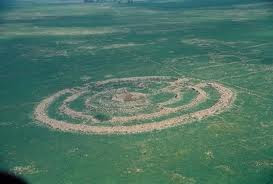 Gilgal Refaim AKA Circle Of Og

Rujm el-Hiri ("the stone heap of the wild cate" later known as Gilgal Refaim "wheel of giants") located 16 miles from eastern coast of Sea of Galilee in the Golan Heights, fascinates as a megalithic structure similar to Stonehenge for its organization in concentric rings. Burlington News offers description and interpretation of the megalith: "The outside circle has a diameter of 159 meters and over 37,000 tons of rock went into the construction of the complex. Two openings in the circles may have been used to measure the solar solstice and the rising of Sirius in 3000 BCE." Gilgal Refaim remains open to interpretation, other hypotheses suggest site used possibly for purpose of burial, ceremonial, or even a calendar. Dr Rami Arav sees similarity to Zoroastrians' use of dakhmas for purpose of excarnation, "...round, high-walled structures used by Zoroastrians in Iran and India, known as dokhmas or towers of silence. These are structures used for a process known as sky burial — the removal of flesh from corpses by vultures. The winged
scavengers perch on the high circular walls, swoop in when the pallbearers depart and can peck a corpse clean in a couple of hours." Readers should keep in mind the megalith dates to distant time before Mesopotamia and predates pyramids by 500 years.

"In the general region of the rings are hundreds of dolmens similar in appearance to those found in northern Britain and France. Some 8,500 dolmens of twenty separate styles have been indentified on the Golan Heights. Each tribe had its own dolmen style. The biggest dolmen stones weigh over 50 tons and are seven metres in height. Graves are found within some domens but not all. Their function could not have been purely burial. There is strong evidence that the biblical giants or Refaim of the Bible were the architects the Circle of the Refaim."

King Og of Bashan was last remnant of these hybrid creatures to be conquered, who inhabited Earth in distant past.  We may not know much about the Nephilim but evidence of their existence remains. A ten minute You Tube video discusses Circle Rephaim (Refaim) below.