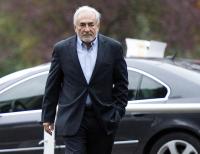 "Strauss-Kahn, 63, is seeking to throw out criminal charges in an inquiry into ties to a prostitution ring in northern France with the legal argument that the authorities are unfairly trying to 'criminalize lust.' That defense and the investigation, which faces a critical judicial hearing in November, have offered a keyhole view into a clandestine practice in certain powerful circles of French society: secret soirees with lawyers, judges, police officials, journalists and musicians that start with a fine meal and end with naked guests and public sex with multiple partners."

The present writer finds defense almost comical, if it didn't reveal how out-of-touch Strauss-Kahn seems willing to portray himself. "'I long thought that I could lead my life as
I wanted,' he said in an interview with the French magazine Le Point. 'And that includes free behavior between consenting adults.'"  Strauss-Kahn thinks life of a libertine is perfectly normal!  Makow labeling style Illuminati only seems right!