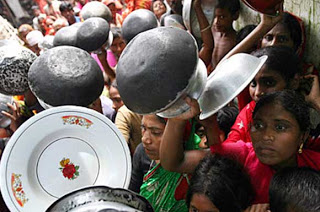 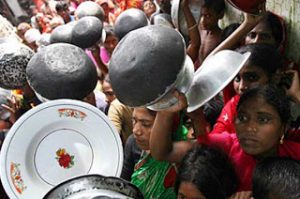 “The world is no more food secure today than three years ago, when the world food-price crisis hit,” said von Braun, a University of Bonn professor and former head of the Washington- based International Food Policy Research Institute. We need “an efficient, global, coordinated reserve policy which brings peace and quiet to the world food market,” von Braun said.

A global reserve would make it “difficult to manipulate the market,” said Marion Guillou, the head of France’s Institut National de la Recherche Agronomique, at the conference.

Von Braun said a food-stabilization system should consist of three parts, including a physical stock managed by the World Food Programme that would allow the agency to respond to a humanitarian crisis more speedily, as well as a reserve based on countries setting aside some of their stocks.

“In a price spike situation, this group could decide, like the International Energy Agency, to release from stock,” von Braun said. “Not a general stabilization fund, but a price- spike stabilization mechanism.”

The third instrument would be a virtual financial fund that could counter speculators by taking positions in the agricultural futures market, he said.

“We have good analysis that speculation played in role in 2007 and 2008,” von Braun said. “Speculation did matter and it did amplify, that debate can be put to rest. These spikes are not a nuisance, they kill. They’ve killed thousands of people.”