gm salmon set to move closer to your table 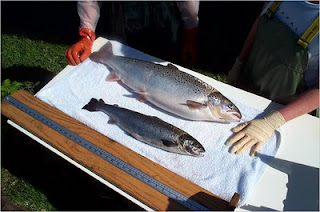 from nytimes: The Food and Drug Administration is seriously considering whether to approve the first genetically engineered animal that people would eat — salmon that can grow at twice the normal rate.

The developer of the salmon has been trying to get approval for a decade. But the company now seems to have submitted most or all of the data the F.D.A. needs to analyze whether the salmon are safe to eat, nutritionally equivalent to other salmon and safe for the environment, according to government and biotechnology industry officials. A public meeting to discuss the salmon may be held as early as this fall.

The salmon’s approval would help open a path for companies and academic scientists developing other genetically engineered animals, like cattle resistant to mad cow disease or pigs that could supply healthier bacon. Next in line behind the salmon for possible approval would probably be the “enviropig,” developed at a Canadian university, which has less phosphorus pollution in its manure.