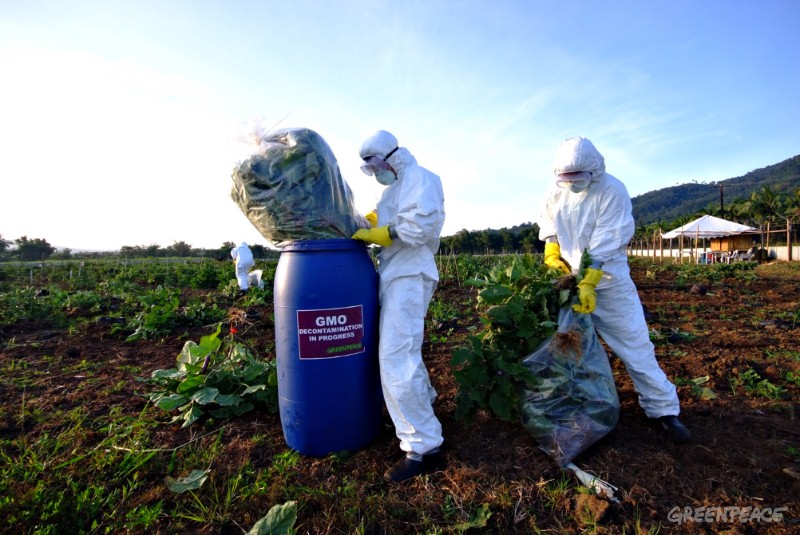 GMO Eggplant Found to be Unsafe for Human Consumption, Environment

from GlobalResearch.ca: Field trials of genetically-modified (GM) Bt eggplant, also known
as Bt talong, have officially ceased in the Philippines following a
major ruling by the nation’s Court of Appeals. Representing a massive
victory for food sovereignty, the Court found that Bt talong is a
monumental threat to both environmental and human health, and has
subsequently ordered that all existing plantings of Bt talong in test
fields be immediately destroyed and blocked from further propagation.


Like in many other nations across the globe, the biotechnology
industry has been craftily trying to sneak its genetic poisons into the
Philippines under the guise of improving crop yields, reducing chemical
use, and yada yada ad nauseum – all the typical industry propaganda and
lies used to convince the more gullible among us that GMOs are some kind
of food production miracle. But the Philippines is not buying all the
hype. And unlike the U.S., the southeast Asian country is taking a bold
stand against a technology that has never been proven safe or beneficial
in any way.


According to the non-profit advocacy group Greenpeace, which
has been working on behalf of humanity to stem the tide of GMO
onslaught all around the world, the Court recently issued a “Write of
Kalikasan,” which basically means that all field trials of Bt eggplant
in the Philippines must stop. The Court also ordered that the
biotechnology aggressors “permanently cease and desist” from conducting
further trials, as well as “protect, preserve, rehabilitate and restore”
all the land they have destroyed in the process.

“The field trials of Bt talong
involve the willful and deliberate alteration of the genetic traits of a
living element of the ecosystem and the relationship of living
organisms that depend on each other for their survival,” states the
ruling. “Consequently, the field trials … could not be declared by this
Court as safe [for] human health and our ecology, [since they are] an alteration of an otherwise natural state of affairs in our ecology.”

Everything about this common-sense decision by the Filipino justice
system makes perfect sense – GMOs definitively spread their poisonous
traits throughout the entire ecosystem, contaminating other crops along
the way, and thus have no place in agriculture, period. But sadly, such
common sense no longer exists in the U.S., where corporate greed and
fundamental corruption have essentially placed profits before people in
every aspect of life.


“We commend the Court of Appeals for living up to its
constitutionally-mandated role as protector of constitutional rights,”
said Greenpeace
Southeast Asia Sustainable Agriculture Campaigner Daniel Ocampo about
the Philippines rejecting GMOs. “This landmark decision reflects that
there are indeed flaws and lapses in the current regulatory process for
Genetically Modified Organisms (GMOs) such as Bt eggplant which exposes our environment and health to unknown long-term consequences and does not establish their safety in any way.”

Meanwhile, millions of acres of uncontested GMO crops in the U.S.
continue to ravage both human and environmental health while the hordes
of mindless puppets in the U.S. Congress ignore the issue or even
pretend that GMOs are not an issue. But this new American pastime of
greed and denial about reality will not last forever, as nature will
eventually catch up and extinguish this agricultural scourge with
“superweeds,” “superbugs,” and disease – that is if the American people
do not take action first to forcibly cleanse their nation of GMOs. The
question is, what will it take for the people to wake up and take
action?