google cars drive themselves, in traffic 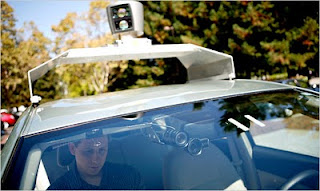 from nytimes: Anyone driving the twists of Highway 1 between San Francisco and Los Angeles recently may have glimpsed a Toyota Prius with a curious funnel-like cylinder on the roof. Harder to notice was that the person at the wheel was not actually driving. The car is a project of Google, which has been working in secret but in plain view on vehicles that can drive themselves, using artificial-intelligence software that can sense anything near the car and mimic the decisions made by a human driver.