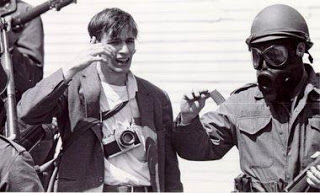 from ap: A tape recording of the 1970 shooting deaths of four Kent State University students by Ohio National Guardsmen reveals the sound of pistol shots 70 seconds earlier, a newspaper reported Friday citing the work of a forensic audio expert.

The finding lends support to a theory that the guardsmen thought they were being shot at during a campus Vietnam War protest. Witnesses said at the time that an FBI informant monitoring the protest fired warning shots because he felt threatened.

The National Guard opened fire on student protesters on May 4, 1970, killing four and injuring nine others. Eight guardsmen were acquitted of federal civil rights charges four years later. Many believe the events contributed to the change in the public's attitude toward the war, which ended five years later.

The reel-to-reel audio recording was made by a Kent State student who placed a microphone at a windowsill in his dormitory, which overlooked the antiwar rally. He later turned the tape over to the FBI. A copy eventually wound up in a Yale University archive.

That's where Alan Canfora, a protester wounded by the Guard gunfire, found it in 2007.

Forensic audio expert Stuart Allen conducted an extensive review of the recording at the request of Cleveland's Plain Dealer newspaper, and he detected four shots matching the acoustic signature of a .38-caliber revolver firing.

Terry Norman, a Kent State student photographing protesters that day for the FBI, was carrying a loaded .38-caliber revolver under his coat, the newspaper said.

Norman told a reporter on the day of the shootings that he was carrying the pistol for protection because protesters had threatened his life when he photographed earlier sit-ins. He has denied firing it. The presidential commission that investigated the shootings determined that he played no role in them.

A crew from Cleveland's WKYC-TV filmed Norman running toward guardsmen and police and being chased by two men. One of the men yelled: "Hey, stop that man! I saw him shoot someone!" The crew recorded Norman handing a gun to a police officer, saying, "The guy tried to kill me." Norman later said he was referring to an assault that happened after the Guard shootings.

Former WKYC reporter Fred DeBrine and soundman Joe Butano have said they heard a Kent State police detective open the cylinder of Norman's gun and say: "Oh my God, he fired four times." The detective denied making the remark. A campus patrolman's report said the gun was fully loaded with no smell of burned powder.

DeBrine and Butano repeated their assertion this week, the Plain Dealer reported. The paper said Norman has remained elusive for decades and could not be reached for comment.