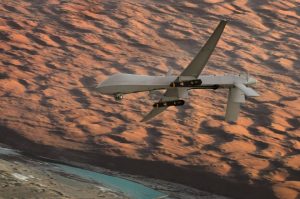 from fastcompany.com: The World Wildlife Fund and Google are teaming up to deploy a fleet of anti-poacher UAVs in Africa. The goal? Survey and stop rhino poachers.

Google-funded drones will fight rhino poachers in Africa. On Tuesday, Google announced the disbursement of a 5 million dollar grant to the World Wildlife Fund (WWF) to purchase a fleet of drone aircraft in Africa. The WWF already uses trackers in Nepal to protect endangered species.

The $5 million grant is part of Google’s Global Impact Award program and will help the WWF acquire an undisclosed number of lightweight “conservation drones,” which are launched by hand and can fly approximately 18 miles. According to Mother Jones’ Dana Liebelson, the WWF will use the drones to track African ivory poachers.