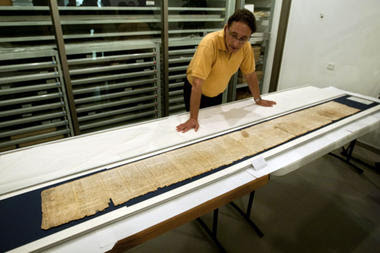 from the register: As if there weren't enough strange rantings on the internet already, Google has just uploaded five of the Dead Sea Scrolls in super high resolution. Of course, the Dead Sea Scrolls are strange rantings that – unlike your average YouTube contribution – are of great historic and religious significance. The scrolls were written 2,400 years ago by a desert-dwelling Jewish tribe, and recount important passages from the Old Testament as well other passages that aren't included in the Bible. Over 850 of them were discovered in 11 caves along the West Bank and are the oldest known surviving copies of Biblical and extra-biblical documents. The five scrolls that will be uploaded by Google are: The Book of Isaiah, the War Scroll, the Temple Scroll, the Commentary on Habbukuk Scroll and the Community Rule Scroll.