google-verizon deal: the end of the net as we know it 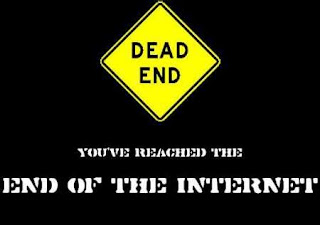 from josh silver: For years, Internet advocates have warned of the doomsday scenario that will play out on Monday: Google and Verizon will announce a deal that the New York Times reports "could allow Verizon to speed some online content to Internet users more quickly if the content's creators are willing to pay for the privilege."

The deal marks the beginning of the end of the Internet as you know it. Since its beginnings, the Net was a level playing field that allowed all content to move at the same speed, whether it's ABC News or your uncle's video blog. That's all about to change, and the result couldn't be more bleak for the future of the Internet, for television, radio and independent voices.

How did this happen? We have a Federal Communications Commission that has been denied authority by the courts to police the activities of Internet service providers like Verizon and Comcast; All because of a bad decision by the Bush-era FCC. We have a pro-industry FCC Chairman who is terrified of making a decision, conducting back room dealmaking, and willing to sit on his hands rather than reassert his agency's authority. We have a president who promised to "take a back seat to no one on Net Neutrality" yet remains silent. We have a congress that is nearly completely captured by industry. Yes, more than half of the US congress will do pretty much whatever the phone and cable companies ask them to. Add the clout of Google, and you have near-complete control of Capitol Hill.

A non-neutral Internet means that companies like AT&T, Comcast, Verizon and Google can turn the Net into cable TV and pick winners and losers online. A problem just for Internet geeks? You wish. All video, radio, phone and other services will soon be delivered through an Internet connection. Ending Net Neutrality would end the revolutionary potential that any website can act as a television or radio network. It would spell the end of our opportunity to wrest access and distribution of media content away from the handful of massive media corporations that currently control the television and radio dial.

So the Google-Verizon deal can be summed up as this: "FCC, you have no authority over us and you're not going to do anything about it. Congress, we own you, and we'll get whatever legislation we want. And American people, you can't stop us."

This Google-Verizon deal, this industry-captured FCC, and the way this is playing out is akin to the largest banks and the largest hedge funds writing the regulatory policy on derivative trading without any oversight or input from the public, and having it rubber stamped by the SEC. It's like BP and Halliburton ironing out the rules for offshore oil drilling with no public input, and having MMS sign off.

Fortunately, while they are outnumbered, there are several powerful Net Neutrality champions on Capitol Hill, like Nancy Pelosi, Harry Reid, Henry Waxman, Jay Rockefeller, Ed Markey, Jay Inslee and many others. But they will not be able to turn this tide unless they have massive, visible support from every American who uses the Internet - whether it's for news, email, shopping, Facebook, Twitter - whatever. So stop what you're doing and tell them you're not letting the Internet go the way of Big Oil and Big Banks. The future of the Internet, and your access to information depends on it.