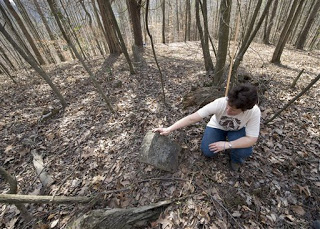 from ap: Walter Young can’t find his great-grandmother’s grave. The coal company that had it moved doesn’t know where the remains ended up.

“It always looked like a safe, good place nobody would bother,” the 63-year-old retiree said of the cemetery along Pigeon Creek where his relative, Martha Curry, was buried. “It was up on a hill.”

But that hill was in West Virginia’s southern coalfields, and over the years, it changed hands. The land around and under the cemetery passed from one coal company to another as mines grew up around it. Now, no one is sure where Young’s great-grandmother was ultimately laid to rest.

The loss is a problem that resonates across West Virginia as small family cemeteries and unmarked graves get in the way of mining, timbering and development interests. Advocates are asking state lawmakers this year to enact regulations that would require better tracking of the graves and protect families who believed that their loved ones wouldn’t be disturbed.

“We just keep hearing about more and more cases of it,” said Carol Warren, a project coordinator with the Ohio Valley Environmental Coalition…

Bill Raney, president of the West Virginia Coal Association, says coal operators follow the law and try to be sensitive when cemeteries get in the way, treating families with dignity. However, he can’t say how often such disputes arise.

International Coal Group‘s Patriot Mining Co. is currently in court in northern West Virginia, seeking approval to relocate a cemetery where the last burial occurred more then 70 years ago. Patriot received permission last year to move a nearby cemetery.