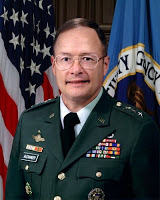 ...and now, a few twisted tales of the coming cyberwar...

from threat level: In the wake of the resignation on Friday of National Cyber Security Center (NCSC) Director Rod Beckstrom over concerns that the National Security Agency plans to take over government cybersecurity efforts, comes an announcement that NSA Director Lt. Gen. Keith Alexander will be giving the keynote address at this year's RSA security conference. The talk is being billed as an explanation about why cybersecurity is a national security issue. The release says Alexander will be talking about "how the Internet enables cyber criminals and others in conducting targeted attacks and what can be done to combat this threat." The Bush Administration frequently tried to equate crime on the internet with national security to gather support for its interest in monitoring internet activities. Alexander's RSA talk will likely continue this trend and serve to bolster the NSA's efforts to wrest control of the government's cybersecurity efforts from the Department of Homeland Security, a prospect that concerns civil liberties advocates, given the NSA's acknowledged warrantless domestic wiretapping program and allegations that the agency also secretly tapped domestic internet communications without a warrant. Last month, Director of National Intelligence Admiral Dennis Blair told Congress that the NSA, rather than the DHS which currently oversees cybersecurity, should take over the government's cybersecurity efforts. A week later, Beckstrom, DHS's current cybersecurity chief, tendered his resignation. [980kb PDF]

outgoing dhs cyber chief expands on why he resigned 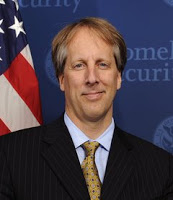 from threat level: In an interview with Forbes on Monday, Beckstrom said, "In intelligence environments like the NSA, you seek out and gather information, and then you classify it. It's the opposite of collaboration." He added that "there are companies that are comfortable working in classified environments, and there are those that aren't. That would be one reason to support a credible, civilian, independent component like the NCSC. Otherwise, we'd lose those relationships we gained by bringing [these companies] into the fold." In his resignation letter, Beckstrom said the NSA is trying to move the NCSC to its base at Ft. Meade in Maryland, a move he opposes on grounds that it would concentrate too much authority in one place. "The issue is that we have a federated government, decentralized for a reason," Beckstrom told Forbes. "Our founding fathers never believed that power should be concentrated in one place. And what today is more powerful than information?"

nsa dominance of cybersecurity would lead to 'grave peril'

from threat level: The government's national cybersecurity efforts would be in "grave peril" if they were dominated by the intelligence community, said Amit Yoran, former head of the Department of Homeland Security's National Cyber Security Division. Yoran told a House subcommittee on Tuesday that although the Department of Homeland Security, which currently oversees the government's cybersecurity efforts, has demonstrated "inefficiency and leadership failure" in those efforts, moving the cyber mission to the National Security Agency "would be ill-advised" due to the agency's lack of transparency. Two weeks ago, Director of National Intelligence Admiral Dennis Blair told the House intelligence committee that the NSA should take over government cybersecurity duties, because the agency has the smarts and the skills for the job. But Yoran, who served at one time as CEO of In-Q-Tel, the venture capital arm of the Central Intelligence Agency, said a cyber program overseen by the NSA would be over-classified and lack adequate oversight and review, which is needed to gain the trust of the public and private-sector partners who will be needed to secure the nation's infrastructure. "One of the hard lessons learned from the Terrorist Surveillance Program is that such a limited review can lead to ineffective legal vetting of a program," Yoran said. "The cyber mission cannot be plagued by the same flaws as the TSP." Yoran's comments echoed those made by Rod Beckstrom, the DHS' current cyber chief who tendered his resignation last week in part over concerns about the NSA assuming a leading role in the government's cybersecurity plan.

from thinkprogress: A new statement from Director of National Intelligence Dennis Blair’s office: "Director of National Intelligence Dennis C. Blair announced today that Ambassador Charles W. Freeman Jr. has requested that his selection to be Chairman of the National Intelligence Council not proceed. Director Blair accepted Ambassador Freeman’s decision with regret." Freeman’s appointment was met by strong right-wing outrage, provoking a “fierce behind-the-scenes lobbying campaign to torpedo the appointment.” The Wonk Room’s Matt Duss noted that Freeman voiced “some inconvenient truths about the Israel-Palestine conflict, and represent[ed] a challenge to the treasured neoconservative myth that US and Israeli interests are identical.” Today, Blair defended Freeman’s appointment under questioning from Sen. Joe Lieberman (I-CT).

exiting, chas freeman attacks 'israel lobby'
from abcnews: In an angry cable to Foreign Policy, Chas Freeman - the now-former nominee to chair the National Intelligence Council - attacks the "Israel Lobby" he says is behind a "barrage of libelous distortions" and says his sandbagged career in the Obama administration "will be seen by many to raise serious questions about whether the Obama administration will be able to make its own decisions about the Middle East and related issues."