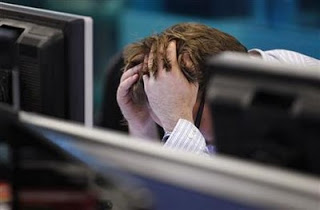 greece has weeks left before bankruptcy

from ap: Greece has enough money to pay pensions, salaries and bondholders through mid-November, the finance minister said Tuesday, as global markets sank on worries that a messy default could bring down European banks and trigger another global recession. The Athens Stock Exchange general index tumbled to close down 6.3 percent, while the main Europe markets fell almost 3 percent. The turmoil endangered French-Belgian bank Dexia, whose shares plunged as much as 40 percent, on worries about its exposure to Greek bonds. The Dow Jones fell 250 points, but recovered somewhat when Federal Reserve Chairman Ben Bernanke said the central bank is prepared to take more steps to stimulate the U.S. economy.