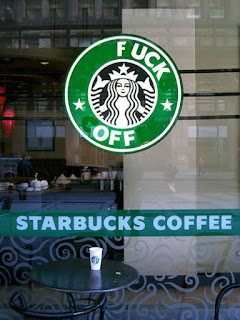 from paul joseph watson: Starbucks has gone on a charm offensive with the launch of its 'Let’s Create Jobs For USA' initiative, which will encourage people to donate $5 dollars every time they buy a coffee towards a fund aimed at helping poor people get loans. However, the group running the scheme is funded by the very same big banks who received trillions in bailout funds that are still deliberately withholding loans from struggling Americans in order to make money off the interest on deposits held with the Federal Reserve.

“Starting Nov. 1, Starbucks will begin collecting donations of $5 or more from customers to stimulate U.S. job growth through its “Jobs for USA” program,” reports the Associated Press. Customers who make the donation will receive a wristband with the word “Indivisible” printed on it.

As expected, the establishment media has spun the move as a rare example of a transnational corporation giving something back to the people, when in reality the move will largely benefit the Wall Street institutions and giant banks who fund the Opportunity Finance Network. What the corporate press is loathe to report is the fact that the OFN, while posing as a philanthropic financial refuge for poor Americans, is little more than a Wall Street front organization. It is bankrolled by the likes of Bank of America, Goldman Sachs, HSBC, Deutsche Bank, JPMorgan Chase, Wells Fargo, and Morgan Stanley.

“The ‘Create Jobs for USA’ fund has been made in partnership with Opportunity Finance Network (OFN), a group of private financial institutions that provide affordable loans to low-income people and communities,”reports the Daily Mail. However, the OFN’s financial backers include the very banks and financial institutions, JP Morgan prime amongst them, who deliberately withheld loans paid for with bailout money that were supposed to kick start the US economy...

Starbucks and Wall Street have often found themselves on the same page before, particularly when it comes to supporting the Obama administration.

Back in 2008, the Wall Street-owned Obama administration attempted to hand Starbucks a piece of the bailout pie when Nancy Pelosi introduced a bill that would have halted the closure of 600 Starbucks coffee shops by using millions of taxpayer dollars to pay for ‘Venti Vouchers’ that would have been usable by Starbucks customers in hard hit areas.

Starbucks also scratched Obama’s back by offering a free cup of coffee for anyone who voted on the day of the last Presidential election, knowing of course that the vast majority of Starbucks customers who live in major metropolitan areas are Democrats and would vote for Obama.

The company also offered free coffee to those who offered to pledge their allegiance to Obama’s creepy ‘national civilian security force’ proposal back in January 2009.