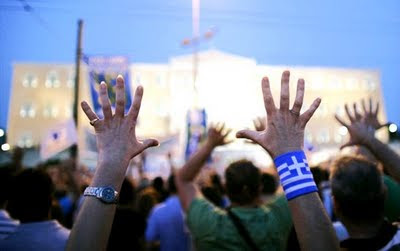 from kurt nimmo: Greek Prime Minister George Papandreou has told his fellow countrymen it is their patriotic duty to accept the austerity plan cooked up by the IMF and the EU. If not accepted, Greece will not get the fifth installment of an international bailout, he warned. “I’m not asking you to listen to outside pressures, I ask that you listen to your soul and your internal patriotic conscience,” Papandreou said. Greek opposition parties have rejected demands by EU leaders for national unity on the prospect of unemployment, a lower standard of living, and a massive giveaway of national resources.

updates from greece, thanks to ‘one archangel’
Today they voted the midterm package-austerity bailout package and there is chaos on the streets. unlike yesterday where agent provocateurs was the flavor of the day (a fake cat and mouse fight between cops and anarchists) today we have the average folk taking on the cops in a dramatic fashion. Since pictures say a thousand words, the following link has a bunch of great pics that should give you an idea: http://www.zougla.gr/page.ashx?pid=2&aid=339969&cid=4

Also, there is a link that should allow you to see what is going on live on the streets:
http://www.zougla.gr/page.ashx?pid=85&playerType=flash

In addition, here is a little youtube video that shows 100% proof of agent provocateurs working with Greek Riot cops. http://www.youtube.com/watch?v=nNfnUSWaLnc