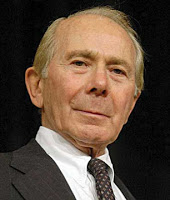 from jerry mazza: “Hammering Hank,” as he’s better known to colleagues, is at it again. According to Reuters, AP, and CNBC at msn.Money, Maurice “Hank” Greenberg has been buying up shares of The New York Times Company to try to break the Sulzberger family’s “hold” on it. Watch out.

As you may remember, Greenberg resigned as CEO from the board of AIG (American Insurance Group) in February 2005, and left the company on March 14, following “regulatory inquiries” made by Attorney General Spitzer (recently elected New York governor). Subsequently AIG and its new CEO Martin Sullivan paid a fine of over $1.6 billion.

Greenberg’s former satellite firm, Marsh & McLennan Companies (MMC), the world’s largest insurance broker, was run by Hank’s son Jeffrey Greenberg from 1993 to 2004. Jeffrey left 11 days after Spitzer’s civil action against MMC was presented on Oct 14, 2004. In January 2005, Marsh was forced to pay $850 million in fines to policyholders for steering clients to insurers from which it received lucrative payoffs.

Both Greenberg Sr. and Jeffrey Greenberg are Council on Foreign Relations members.

By the way, Marsh also bought Kroll, the security and military contracting company that recently pulled out of Iraq. Just a bit of back story about the Greenberg familia. There’s more linked in my September 29 article in Online Journal. And there’s more in my October 9 article, Answering the mail re: Greenberg & AIG. In it, there is a notable quote by Michael Ruppert (From The Wilderness):

"FTW has also conducted an extensive investigation into AIG and its predecessors, including the C. V. Starr Insurance Companies, revealing deep connections to US intelligence dating back to the Office of Strategic Services (OSS) in World War II. These connections include documented CIA operatives connected to drug smuggling from Southeast Asia and a current board member, Frank Wisner, Jr., whose father was a key figure in the creation of the CIA. History, as well as AIG's current operations suggest, that these relationships continue unabated today . . .

" . . . AIG has also been connected, albeit indirectly, to a major money laundering case. As the insurance carrier for the Bank of New York (BoNY) they are defending BoNY in a suit filed this year by BoNY shareholders charging mismanagement of the bank. That suit arose from revelations (See FTW Vol II, No.7, 9/99) in the major media that BoNY had been involved in laundering between $7 and $10 billion in criminal money out of Russia during the 1990s under its Chairman, Thomas Renyi. A credible source has told me, but I have not been able to confirm it, that AIG also insures the U.S. Department of Justice which was charged with investigating BoNY and which decided not to file criminal charges in 1999.”

You have to ask yourself, with a background and resume like this, is this man qualified to own and run a major newspaper? And, if given his druthers, is he also fit to make a bid for the Tribune Company, which owns, among others, the Chicago Tribune, the Los Angeles Times, Newsday and a host of TV stations? He has sold more than $1.5 billion in AIG shares since May, the articles report, it would seem he has some cash in hand for buying.

Do we need another Rupert Murdoch, eager to envelope and steer more media to the right? Do we need Maurice Greenberg, a man who grew out of a corporate culture with long-standing affiliation to the OSS and CIA, an insurance company reputedly involved in money-laundering and drug-smuggling while operating conveniently in some 135 countries?

What’s more, Greenberg has had some help in his Times Company plans from Morgan Stanley, which “submitted a proposal to the [Times] Company that is aimed at cutting the Sulzberger family’s long-standing control of the company by changing the voting structure so that shareholders have equal voting rights.”

It would seem that such an act would compromise the Time’s company’s editorial content, given a block of voters or single large share-block voter, who might chose to interfere in policy.

Additionally, AIG, Greenberg, and Morgan Stanley share another tie mentioned in my article The PROMIS of 9/11 and beyond. I think the opening paragraph underscores a darker side of AIG and Morgan Stanley’s business. The italics are mine . . .

“As whistleblower Richard Grove points out, SilverStream (the software company he worked for at the time of 9/11), served not only AIG (American Insurance Group), it also built trading applications for Merrill Lynch, Deutsche Bank, Banker’s Trust, Alex Brown, Morgan Stanley, and Marsh McLennan. With this impressive list, according to Grove, “you pretty much had the major players involved in the financial aspect of the 9/11 fraudulent trading activity.”

Thus, every fiber in me smells a rat in this alliance. Let me add, too, I am a New York Times reader, online and off. I don’t think it’s a perfect newspaper. I prefer alternative media. But I respect its right to be, and not to be interfered with by the likes of Maurice Greenberg or Morgan Stanley or any of the brokerage firms above listed. The news, and whatever truth The Times brings, should not be for sale to these power brokers. Thank you, I’ll take the Sulzbergers.