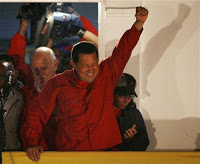 from reuters: Venezuelan President Hugo Chavez stormed to a re-election victory in Sunday's vote, handing him an ample mandate to broaden his promised socialist revolution and challenge Washington's influence in Latin America.

Dressed in his signature red shirt, Chavez told cheering supporters at his presidential palace late Sunday his landslide was a blow to U.S. President George W. Bush's administration, which portrays the leftist as an anti-democratic menace.

"Today we gave another lesson in dignity to the imperialists, it is another defeat for the empire of Mr. Danger," Chavez roared from a balcony above the crowds using one of the insults he has tossed at the U.S. president.

The former soldier's victory will further rile the White House, which worries about Chavez destabilizing Latin America neighbors and strengthening ties between the OPEC heavyweight Venezuela and U.S. foes Cuba and Iran.

The National Electoral Council said Chavez won 61 percent of the vote while rival Manuel Rosales, a governor of an oil-producing province who managed to unite the fractured opposition, won 38 percent after nearly 80 percent of the vote had been counted.

Chavez supporters fired off thunderous fireworks in the capital and drove through Caracas chanting "Hey ho, Chavez will not go" to celebrate his securing six more years in office.