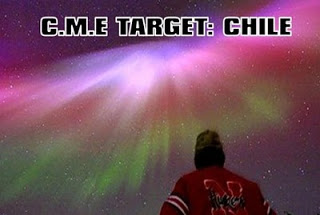 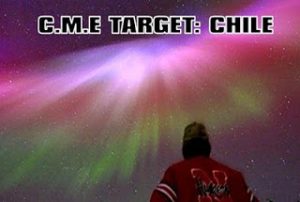 from clyde lewis: The Large 8.8 earthquake that hit Chile was not a product of HARRP but it very well could have been a result of a direct hit from the snapping of a solar filament. All last week pictures had been issued from the Solar and Heliospheric Observatory of an enormous magnetic filament that hung suspended above the surface of the sun’s southern hemisphere. It was estimated to be I million Kilometers or 621,371 miles long. The filament could wrap itself 24 times around the earth. SOHO did say that the Filament did snap around the 25th of February. It produced clouds and a coronal mass ejection. It was unknown what effect it would have had on the earth.

Now we see that a mass earthquake hits Chile some days after the CME occurs. A tsunami set off by the magnitude-8.8 quake threatened every nation around the Pacific Ocean roughly a quarter of the globe.

I would say that we are not out of the woods yet. We have until March 1st to see if anything else strange may go down.

All this activity is a sign that the sun is coming back to life after a long, deep solar minimum. Sunspots have returned crackling with solar flares, and coronal mass ejections.

In the Ground Zero Lounge report "That Synching Feeling: Modern Hermetic Arcanum," I reported that last year it was predicted that something like this would happen within the next three years. It wasn’t predicted by some dime store psychic, but NASA Scientists.

The book 'Severe Space Weather Events–Understanding Societal & Economic Impacts Workshop Report' is a fictitious account that is available for free online and gives us an up close and personal look into a “fictitious“ massive coronal ejection.

The coronal ejection Electromagnetic pulse or EMP from the sun is detailed in the book with a fictitious scenario that happens at Midnight on September 22nd, 2012. In the fictitious account,

“The skies above Manhattan are filled with a flickering curtain of colorful light. Few New Yorkers have seen the aurora this far south but their fascination is short-lived. Within a few seconds, electric bulbs dim and flicker, then become unusually bright for a fleeting moment. Then all the lights in the state go out. Within 90 seconds, the entire eastern half of the US is without power. The earth begins to rock and a devastating earthquake is felt over a large area. A year later and millions of Americans are dead and the nation’s infrastructure lies in tatters. The World Bank declares America a developing nation. Europe, Scandinavia, China and Japan are also struggling to recover from the same fateful event – a violent storm, 150 million kilometers away on the surface of the sun.”

The amazing thing is that the report details beautiful flashing lights above the earth before the EMP or CME hits the earth. When the earthquake hit Chile it was reported on MSNBC that a freelance reporter Cecilia Lagos said that before the quake she saw brilliant flashes of light and brilliant colors in the sky over Chile in the wee morning hours before the quake hit.

People may ask, If this coronal ejection was so huge then why was Chile only feeling the effects? Well this is not over yet, but there is a very good reason why Chile and several other areas in the Southern hemisphere may not escape the wrath of the Electromagnetic Tsunami.

There is an area known as the South Atlantic Anomaly which is a dip in the Earth’s magnetic field which allows cosmic rays, and charged particles to reach lower into the atmosphere. This interferes with communication with satellites, aircraft, and the Space Shuttle. While there are theories as to why this occurs, the geologic origin is not yet known. The earth’s magnetic field is there to protect us from threats. A breach in the field leaves us open for danger.

The magnetic field in the south Atlantic Anomaly can leave people that live in these regions vulnerable for a Pulse ejection from the sun. The mainstream media will not report that a filament from the Sun was dangling above us for three weeks before it exploded. People would panic not knowing what to expect. Ground Zero Listeners have been well aware of what is happening on the sun, and what may be happening to the earth. If you would like to hear past shows of Ground Zero you can download them for a buck out of the file store. It is just one small investment for a whole Lot of knowledge. It is also cheaper than a cup of coffee.

Related: avatar, the burning of eden