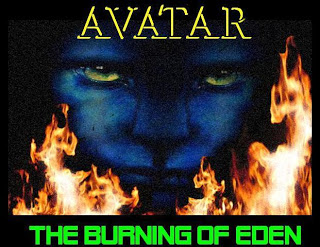 from clyde lewis: I have heard so many interpretations of the film [Avatar]. I have read about the environmental criticisms, the anti military message and the idea of Gaia worship. I have seen comparisons to what we as Americans have done to indigenous tribes and how we invade and eat up resources in order to get oil.

I am sure those interpretations are valid but as I watched it I realized a deeper meaning to the film that once again taps into a meme that we have buried deep in our subconscious.

The film is loaded with symbolism and occult ritual that may have been channeled directly to those who watched it. When thousands of people are exposed to a film like Avatar it is imperative to analyze what message is being sent. I am seeing that the film represents our past as well as our future. It has all of the trappings of occult symbols and names and the scenes of devastation can only be described as biblical and symbolic.

The symbolic nature of the film borders on Luciferian or Illuminating lore that is discussed primarily in secret schools, and in lodges of knowledge. The truth is, the public may not know that they witnessed a retelling of Eden. This time we witness the burning of Eden and the tampering with the tree of life, and the genetic makeup of mankind...

Our future is on course for total destruction and renewal with the answer to survival being our own transference into genetically altered containers that can withstand the harsh environment of the new world.

This is all witnessed by the eye of the great God of chaos. The most interesting thing about this film is the emphasis in both promotion and story line of the film of the Illuminati all-seeing Eye. The all Seeing Eye is seen in all of the promotional posters of the film...

The message of Avatar is very simple. We witnessed an Armageddon in the past and we are awaiting Armageddon in the future. The Antichrist is here in the form of an avatar or shape shifter. His soul is under the control of some force unknown to man. The well of souls at the Dome of the Rock is about to be destroyed and soon we will learn the unobtanium known as the truth is quite obvious.

That truth that will be reveled is that we are an alien culture unto ourselves and that we are Avatars under the control of some power. Whether it be God or devil is anyone’s guess.