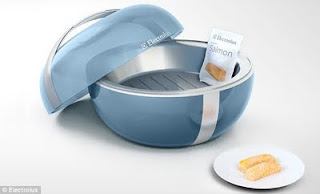 from daily mail: A controversial cooker that 'grows' meat and fish by heating animal cells in your kitchen claimed first prize in the Electrolux design competition tonight [9/25]. The invention, called Cocoon, could develop food with the make-up and nutrients of real meat. Mr Hederstierna, 27, said: "This will create 100 per cent pure meat without the need for animals to be killed and with no risk of contamination. It will change everything." A food generator is a popular concept in science fiction programmes such as Star Trek. Swedish industrial design student Rickard Hederstierna, 27, said it could tackle food shortages as the world's population spirals. And the glass cooker, which would heat pre-mixed food packets containing muscle cells, oxygen and nutrients, would put an end to messy and time-consuming preparation. Competition panelist David Fisher, design director of consultants Seymourpowell, described the invention as "controversial".