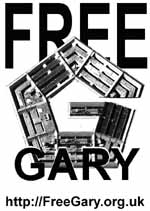 Blogger Grant Lawrence reminds us in recent Alternet post, "Mckinnon has said consistently in numerous interviews that the US has advanced Space Fleets that are capable of star travel. He has never backed down from his assertions. Maybe Mckinnon has not said all he knows." A reader should ask what lies behind intense efforts to extradite McKinnon? Lawrence asks in a similar vein, "But what is making the US government so adamant about bringing Mckinnon to justice in the US?" Lawrence is led to a conclusion, the facts of the case would lead many of us, "maybe it is because Gary Mckinnon spilled the beans on what he saw and he shouldn’t have... Secret technologies are evidently supposed to be secret no matter how it would benefit humanity."

A 2006 Wired article, "'UFO Hacker' Tells What He Found," shows McKinnon freely providing details of his hacking adventure, "A NASA photographic expert said that there was a Building 8 at Johnson Space Center where they regularly airbrushed out images of UFOs from the high-resolution satellite imaging. I logged on to NASA and was able to access this department. They had huge, high-resolution images stored in their picture files. They had filtered and unfiltered, or processed and unprocessed, files. My dialup 56K connection was very slow trying to download one of these picture files. As this was happening, I had remote control of their desktop, and by adjusting it to 4-bit color and low screen resolution, I was able to briefly see one of these pictures. It was a silvery, cigar-shaped object with geodesic spheres on either side. There were no visible seams or riveting. There was no reference to the size of the object and the picture was taken presumably by a satellite looking down on it. The object didn't look manmade or anything like what we have created. Because I was using a Java application, I could only get a screenshot of the picture -- it did not go into my temporary internet files. At my crowning moment, someone at NASA discovered what I was doing and I was disconnected."

Is there more than McKinnon has revealed? It's the only sufficient explanation for the sustained pressure on the hacker, over the years, a constant reminder to remain quiet. You may view a previous blog entry on McKinnon's plight here. A recent update at Free Gary McKinnon shows news release of continued effort by US to extradite him. The present writer wonders, what else does McKinnon know and possibly holding back for his own safety?