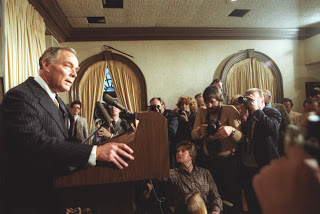 haig is not ‘in control here’: watergate/reagan operative dead at 85

from independent: Alexander Haig, the four-star general who played a crucial role as White House chief of staff at the climax of the Watergate scandal, and later served as secretary of state during Ronald Reagan's presidency, died yesterday [feb20] in Baltimore. He was 85...

But his most important and controversial posts were in government. To some surprise, the newly elected Reagan chose Haig as secretary of state – and within barely two months the country's top diplomat uttered the ill-considered words that would bedevil him ever after.

Hours after the near-successful assassination attempt on Mr Reagan on 30 March 1981, Haig went into the White House briefing room to tell reporters: "I'm in control here." The remark appeared to betray an ignorance of the constitution: as well as the vice-president, the speaker and the senior member of the Senate also rank ahead of the secretary of state in the line of succession if the president is incapacitated.

More important, it seemed to confirm the square-jawed and forthright Haig as a power-crazed general. "It was reminiscent of Dr Strangelove," Richard Darman, Reagan's deputy chief of staff, would later write. "Haig intended to calm the nation. He unnerved the world." ...

In fact, Haig's most vital service to his country had come a decade earlier. He had already earned Richard Nixon's confidence during a two-year stint as deputy national security adviser under Henry Kissinger when Nixon made him White House chief of staff in May 1973, just as Watergate began to engulf the presidency.

As the crisis moved to its climax, Haig played a crucial role as a channel between the president and Congress. He gently persuaded Nixon to resign once impeachment proceedings had become a certainty. With a skill belied by his later gaffes, he handled the delicate negotiations for the transfer of power from Nixon to Gerald Ford.

Haig remained at the White House only a few weeks after Nixon stepped down on 9 August 1974. It was widely believed, though never confirmed, that he had brokered a secret deal for Nixon to resign in return for a guarantee from Ford of a pardon – a pardon that would be granted on 8 September 1974.