dentists buy back halloween candy to send to troops 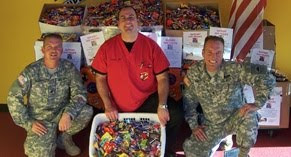 from foxnews: By now parents are probably looking for ways to get their kids to get off the Halloween candy sugar high. How about selling the sweets to your dentist? A candy buyback program is underway with the treats then being ship overseas to U.S. troops. Dentists call it a win-win-win. The kids get some money, we keep unwanted sugar out of their bodies and the troops receive a care package from home.

10-year-old draws a pistol to protect his halloween candy
from nydailynews: A 10-year-old trick-or-treater in South Carolina allegedly pulled a pistol on a woman who joked about stealing his sack of Halloween candy. The unidentified woman, 28, told Aiken police that she was out in her neighborhood on Monday night when she spotted some boys she knew going door to door to ask for sweets and teased that she was going to swipe their loot, The Augusta Chronicle reported. But the spoof turned sour when one boy pulled a 9-mm pistol and said, "No you're not," police said. Cops said the gun wasn't loaded, but the boy had a loaded clip tucked away in his costume. His brother, also 10, also had a gun. The boy who pulled the gun was taken to a local police station, before being turned over to his parents, the Chronicle said. Lt. David Turno told the newspaper that the boys swiped the guns from their grandfather.

beware of gummy bears found under the influence