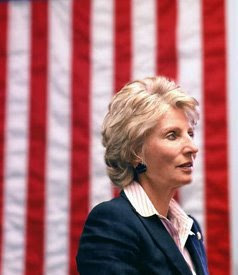 from cqpolitics: Rep. Jane Harman, the California Democrat with a longtime involvement in intelligence issues, was overheard on an NSA wiretap telling a suspected Israeli agent that she would lobby the Justice Department reduce espionage-related charges against two officials of the American Israeli Public Affairs Committee, the most powerful pro-Israel organization in Washington. Harman was recorded saying she would "waddle into" the AIPAC case "if you think it'll make a difference," according to two former senior national security officials familiar with the NSA transcript... The identity of the "suspected Israeli agent" could not be determined with certainty, and officials were extremely skittish about going beyond Harman's involvement to discuss other aspects of the NSA eavesdropping operation against Israeli targets, which remain highly classified. But according to the former officials familiar with the transcripts, the alleged Israeli agent asked Harman if she could use any influence she had with Gonzales, who became attorney general in 2005, to get the charges against the AIPAC officials reduced to lesser felonies. Rosen had been charged with two counts of conspiring to communicate, and communicating national defense information to people not entitled to receive it. Weissman was charged with conspiracy... "It's a story about the corruption of government - not legal corruption necessarily, but ethical corruption." Ironically, however, nothing much was gained by it. The Justice Department did not back away from charging AIPAC officials Steve Rosen and Keith Weissman for trafficking in classified information. Gonzales was engulfed by the NSA warrantless wiretapping scandal. And Jane Harman was relegated to chairing a House Homeland Security subcommittee.

harman caught on tape agreeing to lobby for alleged aipac spies
from jeremy scahill: This is a huge story... The case, known as the AIPAC espionage scandal centers around allegations that at least two AIPAC staff members passed sensitive US intelligence on Iran, provided by Pentagon official Lawrence Franklin, to Israel. In early 2006, Franklin pled guilty to espionage-related charges and was sentenced to 13 years in prison. The case against two indicted AIPAC staffers, Steve Rosen and Keith Weissman, is ongoing. Allegations that Harman intervened in this case in an effort to win the spot as chair of the Intelligence Committee have been widespread since 2006, but an FBI investigation into Harman was dropped for “lack of evidence.”

harman & aipac: more evidence of massive government corruption
from kurt nimmo: It really comes as no surprise Rep. Jane Harman was caught on a federal wiretap offering to lobby the Justice Department to reduce espionage-related charges against AIPAC officials. Much of Congress is beholden to the Israeli pressure group. Instead of taking note of this common practice — politicians coming to the rescue of their favored constituents at the expensive of those they were elected to represent — we should take note of the willingness of the NSA and FBI to make this information public. Somebody wanted Jane Harman out of the picture. The case is yet another example of how politics works in the District of Criminals. In exchange for help in getting espionage-related charges reduced against two AIPAC officials, a suspected Israeli agent pledged to lobby Nancy Pelosi, then-House minority leader, to appoint Harman chair of the Intelligence Committee after the 2006 elections, according to CQ Politics. More specifically, the Los Angeles Times reveals, the caller told Harman Haim Saban would threaten to withhold campaign contributions from Pelosi unless Harman became committee chairwoman... “I’m a one-issue guy and my issue is Israel,” Saban told Forbes in 2003. Harman’s office told the Associated Press she “never contacted the Justice Department about its prosecution of present or former AIPAC employees, and the Justice Department never informed her that she was or is the subject of or involved in an investigation.” In a statement, Harman attempted to change the subject. “If there is anything about this story that should arouse concern it is that the Bush administration may have been engaged in electronic surveillance of members of the congressional intelligence committees.” Harman didn’t bother to mention the fact she had leaned on the New York Times in order to get the newspaper to hold off on publishing an article on the unconstitutional NSA wiretap program. “Harman is a poster child for what has been wrong with Congress for the last 8 years,” writes George Washington’s Blog. She needs to be brought up on ethics and bribery charges immediately and drummed out of Congress. If the AIPAC operatives are convicted, treason charges against Harman should not be ruled out.