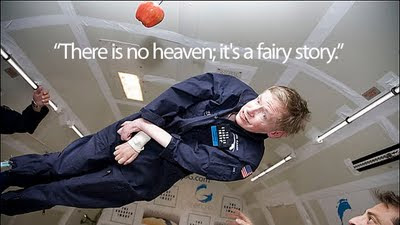 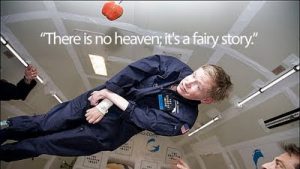 from belief blog: The concept of heaven or any kind of afterlife is a "fairy story," famed British scientist Stephen Hawking said in a newspaper interview this week. "I regard the brain as a computer which will stop working when its components fail," the physicist said in an interview published Sunday in Britain's Guardian newspaper. "There is no heaven or afterlife for broken down computers; that is a fairy story for people afraid of the dark." Hawking, who was diagnosed with amyotrophic lateral sclerosis - a terminal and debilitating illness that causes loss of mobility and impairs speech - at age 21 and was not expected to live long after, also talked with The Guardian about his own mortality. "I have lived with the prospect of an early death for the last 49 years," said Hawking, 69. "I'm not afraid of death, but I'm in no hurry to die. I have so much I want to do first." In a book published last year, Hawking wrote that God did not create the universe, in what he said was an attempt to banish a divine creator from physics. Hawking says in the book "The Grand Design" that given the existence of gravity, "the universe can and will create itself from nothing... Spontaneous creation is the reason why there is something rather than nothing, why the universe exists, why we exist," he wrote in the introduction of the book, which was published in September. "It is not necessary to invoke God to light the blue touch paper (fuse) and set the universe going," Hawking wrote.