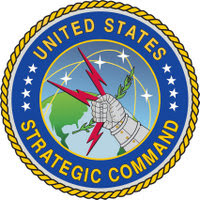 from op-ed news: They used to call it the Strategic Air Command (SAC). They were in charge of the nuclear bombers and nuclear missiles. Then the Pentagon changed the name to the Strategic Command – StratCom.

StratCom is headquartered at Offutt AFB in Omaha, Nebraska. Their mission now includes being in charge of “full-spectrum global strike” (staging offensive, preemptive attacks); combating weapons of mass destruction; space and computer warfare; ballistic missile defense; and surveillance and reconnaissance (the “warrantless wiretaps” conducted by the National Security Agency). In other words it runs almost the whole shebang! 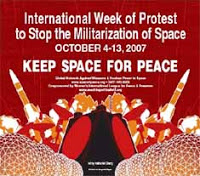 I will be spending almost the entire Keep Space for Peace Week in Omaha as the guest of Global Network affiliate Nebraskans for Peace. They are planning a series of events during space week to highlight the growing and dangerous mission of StratCom.

According to Nebraskans for Peace Coordinator Tim Rinne:

“Under the [Bush] administration’s ‘doctrine of preemption,’ StratCom has been commissioned to launch a first-strike attack anywhere on earth — within two hours — if a threat to America’s national security is even suspected. Following the same drill used on Iraq over its alleged stockpiles of WMD, this new StratCom directive (called ‘CONPLAN 8022‘) is a high-tech version of ‘shoot first and ask questions later.’ And neither a dithering Congress nor international rule of law will be permitted to stand in the way… StratCom’s attack plan even includes the use of tactical nuclear weapons to take out the reinforced bunkers housing Iran’s nuclear research facilities.”