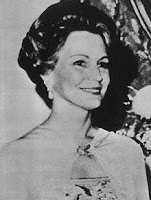 from ap: Martha "Sunny" von Bulow, an heiress who spent the last 28 years of her life in oblivion after what prosecutors alleged in a pair of sensational trials were two murder attempts by her husband, died Saturday at age 76.

She died at a nursing home in New York, her children said in a statement issued by family spokeswoman Maureen Connelly. Martha von Bulow was a personification of romantic notions about high society - a stunning heiress who brought her American millions to marriages with men who gave her honored old European names.

But she ended her days in a coma, showing no sign of awareness as she was visited by her children and tended around the clock by nurses. In the 1980s, she was the offstage presence that haunted her husband's two sensational trials in Newport and Providence, R.I.

At the first trial, in 1982, Claus von Bulow was convicted of trying twice to kill her by injecting her with insulin at their estate in Newport, R.I. That verdict was thrown out on appeal, and he was acquitted at a second trial in 1985. The murder case split Newport society, produced lurid headlines and was later made into a film, "Reversal of Fortune," starring Glenn Close and Jeremy Irons.