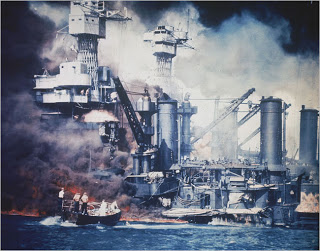 in honor of 67th anniversary of the attack on pearl harbor, the old grey lady offers up more debunking of another 'catalyzing event'

from nytimes: It has remained one of World War II’s most enduring mysteries, one that resonated decades later after Sept. 11: Who in Washington knew what and when before the Japanese attacked Pearl Harbor on Dec. 7, 1941?

Specifically, who heard or saw a transcript of a Tokyo shortwave radio news broadcast that was interrupted by a prearranged coded weather report? The weather bulletin signaled Japanese diplomats around the world to destroy confidential documents and codes because war with the United States, the Soviet Union or Britain was beginning.

In testimony for government inquiries, witnesses said that the “winds execute” message was intercepted as early as Dec. 4, three days before the attack.

But after analyzing American and foreign intelligence sources and decrypted cables, historians for the National Security Agency concluded in a documentary history released last week that whatever other warnings reached Washington about the attack, the “winds execute” message was not one of them.

A Japanese message intercepted and decoded on Nov. 19, 1941, at an American monitoring station on Bainbridge Island, in Washington State, appeared to lay out the “winds execute” situation. If diplomatic relations were “in danger” with one of three countries, a coded phrase would be repeated as a special weather bulletin twice in the middle and twice at the end of the daily Japanese-language news broadcast.

In the history, “West Wind Clear,” published by the agency’s Center for Cryptologic History, the authors, Robert J. Hanyok and the late David Mowry, attribute accounts of the message being broadcast to the flawed or fabricated memory of some witnesses, perhaps to deflect culpability from other officials for the United States’ insufficient readiness for war.