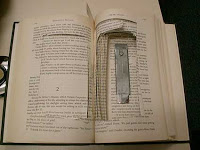 from cbs2: A Dallas police motorcycle officer who crashed and died Friday while escorting Democratic presidential candidate Hillary Rodham Clinton's motorcade to a campaign rally has been identified, CBS station KTVT-TV, in Dallas reported. Senior Cpl. Victor Lozada, a 20-year veteran of the department, was killed in the accident. Sources say Lozada, 49, was relatively new to the motorcycle division.

from tampa tribune: A 21-year-old Clearwater man was arrested at Tampa International Airport this weekend after security personnel found a box cutter in a hollowed-out book, authorities said... When searching the backpack, a security officer found a book titled "Fear Itself." The book was hollowed out, and the box cutter was inside. Several sheets of paper in the backpack included rap lyrics that referred to police, narcotics, weapons and killing. Baines told officers he is a rapper who writes his own lyrics and that rap music writers need to "play the part," the report states.

US & canada agree to use each other's troops

from gazette: The United States and Canada have inked an agreement to help one another during civil emergencies... The Civil Assistance Plan allows the military from one nation to support the armed forces of the other nation. “This document is a unique, bilateral military plan to align our respective national military plans to respond quickly to the other nation’s requests for military support of civil authorities,” Renuart said in a statement. The agreement allows mutual assistance during floods, forest fires, hurricanes, earthquakes and effects of a terrorist attack... The plan facilitates the military-to-military support of civil authorities after government authorities agree on a response. NorthCom was established on Oct. 1, 2002. Canada Command was set up on Feb. 1, 2006.

from paul joseph watson: A former Congressman says that the U.S. government created Al-Qaeda and was involved in bombing its own citizens on 9/11, telling a national radio show that elements of the Bush administration assisted the attacks on the WTC and the Pentagon. Daniel Hamburg is a former Democratic Congressman who was elected to the 1st Congressional District of California in 1992 and also subsequently ran for Governor of California, finishing in 3rd place.