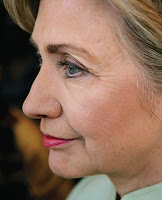 hillary wouldn’t pull out of iraq during her 1st term

from raw story: The leading Democratic contender for the presidency was asked whether she'd pull out all troops from Iraq in her first term.

"You know, I'm not going to get into hypotheticals and make pledges, because I don't know what I'm going to inherit," Sen. Hillary Clinton (D-NY) told ABC's George Stephanopoulos, according to the New York Times:

"I don't know and neither do any of us know what will be the situation in the region. How much more aggressive will Iran have become? What will be happening in the Middle East?

How much more of an influence will the chaos in Iraq have in terms of what's going on in the greater region?...

Will we have pushed Al Qaeda in Iraq out of their stronghold with our new partnership with some of the tribal sheikhs or will they have regrouped and retrenched? I don't know and I think it's not appropriate to be speculating."

Clinton is in a bind over her stance on the war - on the one hand, she has to appease those who support liberal activist groups like MoveOn.org - and on the other, she must court a broader electorate...

The following video is from ABC's This Week, broadcast on September 23.