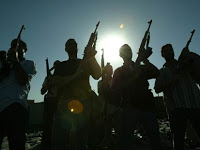 official: 'on the tape, there was nobody
shooting at the blackwater guards'

from abc: The shooting deaths of 11 Iraqis and wounding of 12 more, allegedly by private security contractors working for Blackwater USA, has become a case of "he says, she says" in Iraq.

Blackwater claims that the convoy of U.S. embassy officials they were escorting in western Baghdad came under attack, and they returned fire at insurgents.

The Iraqi government says Blackwater opened fire without provocation, shooting randomly at civilians in a state of uncontrolled panic. And now the Iraqis say they have a videotape, shot from a nearby police station, proving their version of the story is true.

"On the tape, there was nobody shooting at the Blackwater guards," said Gen. Hussein Kamal, Iraq's deputy minister of interior for intelligence, who has seen the videotape. "I believe they overreacted."

The Blackwater shootings have become a major source of friction between the U.S. and Iraqi governments.